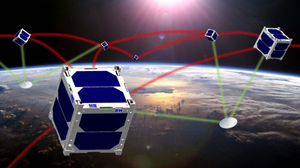 The impressive innovation progress in small satellite technologies will be presented again at the pico- and nano-satellite workshop series. The focus of the workshop is on pico- and nano-satellite missions, dedicated subsystems and fields of applications of small satellites. High quality contributions especially in the area of possible applications in telecommunications, Earth observation, space science and education are welcome. Further topics to be emphasized are satellite formations and constellations, miniaturization techniques and micro-components.

The aim of the workshop is to bring together the research community of pico- and nano-satellites, enabling them to share their visions and lessons learned, as well as to analyze technological and scientific advancements. The workshop covers the forefront of the broad spectrum of research activities, enabling the advancement in pico- and nano-satellites.

Ever since its initiation in 2007, the workshop attracted growing interest not only from Universities, but also from research institutes, start-up and industry in the field of space science and technology. The workshop is organized yearly in alternation between Universität Würzburg and TU Berlin.

Keeping with the tradition of continued and competitive research activities in the field of small satellites, the 14th workshop on pico- and nano-satellites will be hosted once again at Wuerzburg University. We are looking forward to welcoming participants and lecturers from Germany, Europe and overseas.

Registrations are open and can be done via email to pina2021@informatik.uni-wuerzburg.de

The 14th Pico- and Nano-Satellite Workshop will be held in the computer science building of the Julius-Maximilians-University Wuerzburg at the campus Hubland Süd.