Volume 2 of The handbook on Socially Interactive Agents: 20 years of Research on Embodied Conversational Agents, Intelligent Virtual Agents, and Social Robotics, edited by Birgit Lugrin, Catherine Pelachaud and David Traum, and published by ACM is out now. 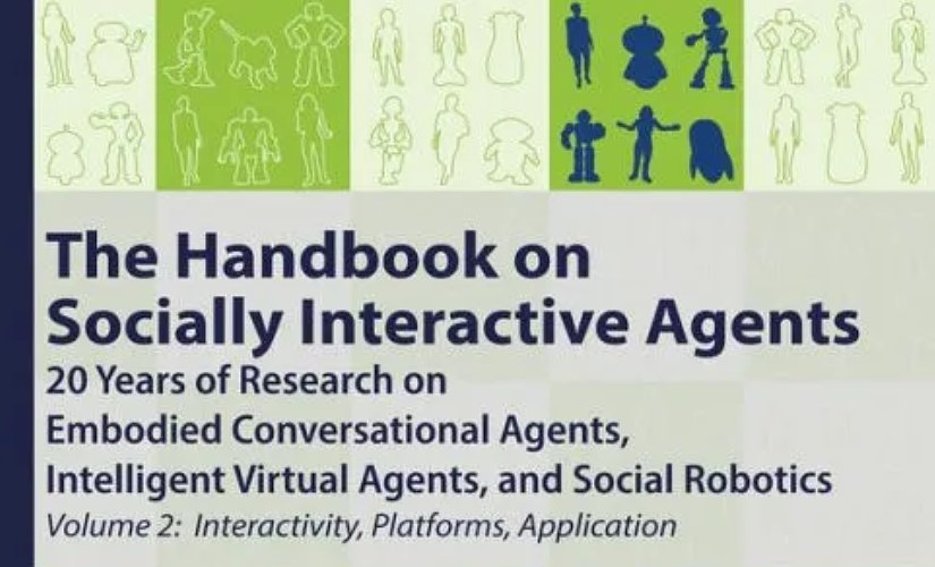 The Handbook on Socially Interactive Agents provides a comprehensive overview of the research fields of Embodied Conversational Agents; Intelligent Virtual Agents; and Social Robotics. Socially Interactive Agents (SIAs); whether virtually or physically embodied; are autonomous agents that are able to perceive an environment including people or other agents; reason; decide how to interact; and express attitudes such as emotions; engagement; or empathy. They are capable of interacting with people and one another in a socially intelligent manner using multimodal communicative behaviors; with the goal to support humans in various domains.

Written by international experts in their respective fields; the book summarizes research in the many important research communities pertinent for SIAs; while discussing current challenges and future directions. The handbook provides easy access to modeling and studying SIAs for researchers and students; and aims at further bridging the gap between the research communities involved.

The second volume starts with perspectives on interaction; examined from different angles such as interaction in social space; group interaction; or long-term interaction. It also includes an extensive overview summarizing research and systems of human–agent platforms and of some of the major application areas of SIAs such as education; aging support; autism; and games.