The group of Prof. Kayal at the chair of computer science VIII of the University of Würzburg runs a receiving station where several sources of data are gathered, for example ADS-B data from aircrafts and images from NOAA and Meteosat satellites (operated by EUMETSAT). Its purpose is the establishment of a multisensor platform where all the data can be aggregated, for example to assist in the research of unknown aerospace phenomena. The receiving station also contributes to the education of students because they can gain useful experiences by working with real data from satellites and other sources. 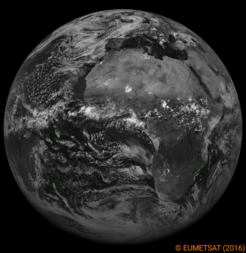 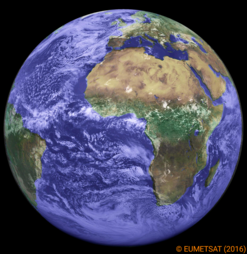 The idea of a Meteosat App was born in June 2015 when the second semester students in Aerospace Computer Science where introduced in the capabilities of this station.

In August 2015, the project Meteosat App was started. The team consists of three students (Johannes Dauner, Hermann Helgert and Andreas Maurer) and was supervised by Borja Garcia (former research assistant, group of Prof. Kayal at the chair of computer science VIII).

The first goal of the project is the development of a smartphone app which shows the up-to-date images from the Meteosat satellites. As a long-term goal, the IT infrastructure of the receiving station should be extended by a server application which merges the available data from all sources and provides the computed information to a variety of applications and devices. At the moment, the server only provides a webservice for accessing the images from EUMETSAT via app and browser, but it can be extended easily for future applications. 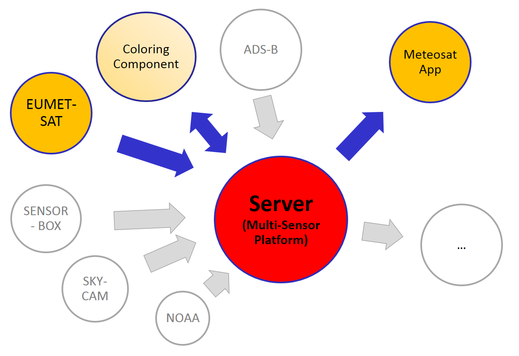 Picture 3: Structure of the server

During the course of the project, the students not only created a useful smartphone app and the necessary back end server application but also got a lot of hands-on experience in project work in the field of aerospace information technology.

Features of the Meteosat App

The Meteosat-10 satellite provides gray scale images which show the earth in 12 different spectral channels (visible, infrared and water vapour). In the app, you can choose channel and time of the image you want to see. As an extra feature, an additional channel with colored images is provided by the app (see picture 2). The coloring is done on the server side by the so called ‘Coloring Component’. It is also possible to select a time interval to see an animation of the available images in this selected time interval (see video 1). It is planned to support additional EUMETSAT satellites in the future. 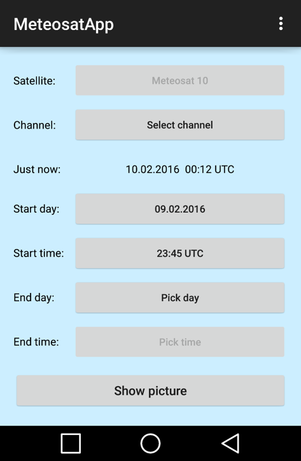 Video 1: Animated images of one day