The idea of OpenFlow is to separate the data path from the control path. This means that simple forwarding still resides on the switch, whereas high-level routing decisions are done on a separate controller. This split of the switching and controlling logic enables the creation of vendor-independent intelligent control mechanisms.

In the OpenFlow architecture the operating system is represented by the OpenFlow controller. As the key component of the OpenFlow ecosystem, the behavior and performance of the controller are significant for the entire network. Therefore, it is important to understand these influence factors, when planning an OpenFlow-based SDN deployment. We have built a tool to help achieving just that - a flexible OpenFlow controller benchmark. The benchmark creates a set of message-generating virtual switches, which can be configured independently from each other to emulate a certain scenario and also keep their own statistics. This way a granular controller performance analysis is possible.

Only few performance evaluations of OpenFlow architectures exist. Testbeds are often limited to smaller topologies, but the mentioned problems of a controller especially occur on larger, geographically distributed architectures. Simulation tools are much more suitable for this task since they allow to evaluate the scalability of the chosen controller. Furthermore, they allow to validate mechanisms before their deployment. Additionally, changes in the specification of the investigated technology can easily be integrated in the simulation model.

We present the implementation of our model of the OpenFlow system for INET-2.0 andOMNeT++ 4.2 based on the OpenFlow switch specification 1.0.
Further information and the source code can be found here.

An IaaS provider has to find a good balance between the various customer application requirements and the efficient use of the available resources in the data center. The ECDC (Energy effiCient Data Center) approach is a smart mechanism for finding this balance. It leverages monitoring information from machines as well as network devices and environmental data to create a coherent view of the current situation in a data center. This alone enables a single network operator to react to system changes as soon as they happen. However, the monitoring data is also used by a smart control application to react in certain situations by redistributing virtual machines, traffic flows and VLANs as well as powering devices up and down. 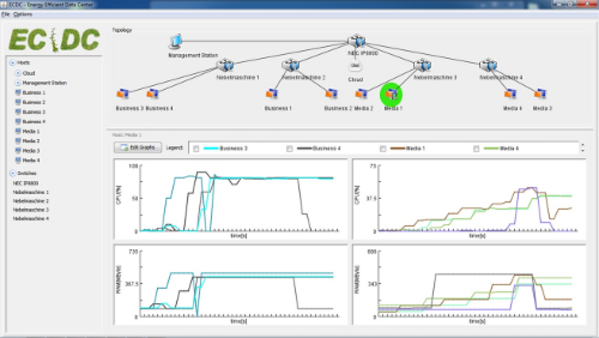 Understanding the performance and limitations of the basic OpenFlow concept is a prerequisite for using it for experiments with new protocols and mechanisms. Therefore, we aim to provide a performance model of an OpenFlow system. The model is based on results from queuing theory and is verified by simulations and measurement experiments with a real OpenFlow switch and controller. We intent to gradually refine the model and adapt it to the needs of the community. The advantage of an analytical model over the simulation is the fact that it can provide indicators for performance and scalability in a few seconds. time whereas the simulation may require several hours to complete depending on the computing hardware and therefore provide fast feedback.

The Interactive PrOxy Management (IPOM) tool enables us to define and emulate networks of arbitrary complexity on top of existing experimental facilities by means of OpenFlow and network emulating proxy nodes. The IPOM tool is split into two parts, the topology editor for creating a network topology and the topology management tool for controlling the flows in the network. Before running experiments in a testbed environment, the physical network topology can be mapped using the IPOM topology editor. The IPOM management tool provides the possibility to dynamically add and remove proxies. Additionally, arbitrary OpenFlow actions can be installed for any flow. 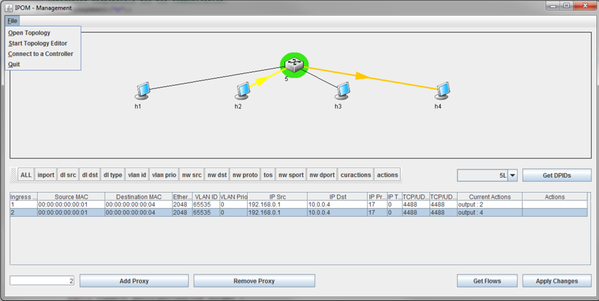 inproceedings[ to top ]
misc[ to top ]
presentation[ to top ]