General idea of an autoencoder. The input is compressed into the latent space. Normal behavior can be reconstructed well, anomalies not.

All plants need pollination in order to reproduce. "Pollination is the transfer of pollen from a male part of a plant to a female part of a plant [...]" (Wikipedia), which enables the plant to fertilize and produce seeds. A small portion of pollination occurs by the wind, but a larger part is done by insects, such as (honey) bees. The decline in insects inhibits this way of pollination. To help apiarists monitor the health of their bee colonies, we developed an algorithm to detect anomalies (i.e. any abnormal behavior) within beehives. Within the we4bee project, we aim to support beekeepers in their decision making.
In our published paper Anomaly Detection in Beehives using Deep Recurrent Autoencoders1 we developed an algorithm, that can distinguish between normal sensor data from beehives and anomalous data. In a manual step, we are able to further classify different types of anomalies. For that we defined three types of anomalies typically occurring in beehives:

Finding anomalies in large datasets requires specialized methods that extend beyond manual evaluations. Autoencoders (AEs) are a popular choice in anomaly detection. They are a deep neural network architecture, that is designed to reconstruct normal behavior with minimal loss of information (see Figure 1). In contrast, an AE’s reconstruction of anomalous behavior shows significant loss and can therefore be identified. They are purely data-driven without the need for beehive specific knowledge. This implies, the higher the difference in input and reconstructed input, the higher the evidence of an anomaly.

In future work we want to give apiarists even further insights into their colony by extending the current autoencoder. Additionally we include several sensors at once and continuously use a growing dataset to enhance performance. Furthermore we want to analyze the hibernation period, too. So, stay tuned for future updates into beehavior analysis in we4bee. 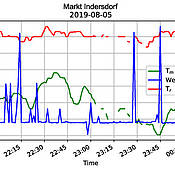 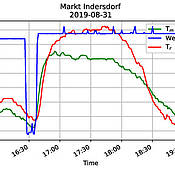 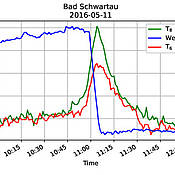 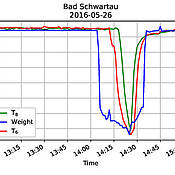