In our paper, we introduce a large dataset of in-game item purchase logs from the MOBA game Dota 2 and evaluate the performance of state-of-the-art sequential item recommendation algorithms for helping users to correctly itemize during a game. 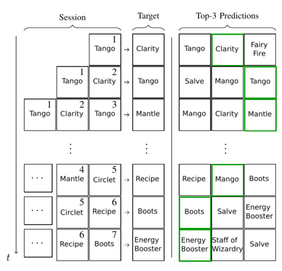 Multiplayer Online Battle Arena (MOBA) games such as Dota 2 attract hundreds of thousands of players every year. Despite the large player base, it is still important to attract new players to prevent the community of a game from becoming inactive. Entering  MOBA games is, however, often demanding, requiring the player to learn numerous skills at once. An important factor of success is buying the correct items which forms a complex task depending on various in-game factors such as already purchased items,  the team composition, or available resources. A recommendation system can support players by reducing the mental effort required to choose a suitable item, helping, e.g., newer players or players returning to the game after a longer break, to focus on other  aspects of the game. Since Sequential Item Recommendation (SIR) has proven to be effective in various domains (e.g. e-commerce, movie recommendation or playlist continuation), we explore the applicability of well-known SIR models in the context of  purchase recommendations in Dota 2. To facilitate this research, we collect, analyze and publish Dota-350k, a new large dataset based on recent Dota 2 matches. We find that SIR models can be employed effectively for item recommendation in Dota 2. Our  results show that models that consider the order of purchases are the most effective. In contrast to other domains, we find RNN-based models to outperform the more recent Transformer-based architectures on Dota-350k.